Richard Hoy is a contemporary menswear designer based in Johannesburg. Richard focuses on wearable luxury pieces.

Richard began his label after deciding to expand his love for creating, “After graduating from fashion design I worked in retail as a visual merchandiser. I started making men’s custom underwear part time because I was  passionate about underwear. I later thought to start to make items that weren’t just for the bedroom but to explore another side of myself that people can actually see and appreciate”.

Richard Hoy is a brand that specializes in “premium tailored casual wear with a sporty mismatched aesthetic”.  The label is influenced by a number of definitive forces. 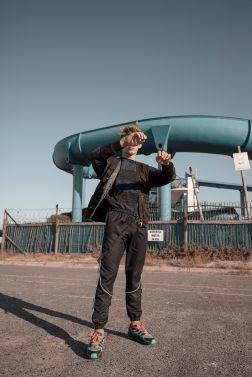 When discussing the future of the brand, Richard expresses his want to create jobs and to inspire people, “The future is uncertain but bright. I would love to eventually have my own store in a few locations housing cool underground designers from around the world”. Keep an eye on this young talent, Richard Hoy is making waves.